Meatballs are known as albóndigas in Spain, a name derived from the Arabic al-bunduq meaning hazelnut, or in this context, a small round object. As with many dishes in Spain, albóndigas are believed to be of Arab origin, thought to have been introduced to Spain during the period of Muslim rule. A staple tapas that can be found on the menus of many taperiás around the country, they are served both as an appetizer and a main dish, often in tomato sauce. As well as meat based ones, you also find them on the coast made of seafood, such as from cuttlefish in places such as Heulva in the south for example. Normally made with with breadcrumbs, we have instead used the regañas made with extra virgin olive oil which we crumbed in a food processor. Any breadcrumbs will do though if you do not have these to hand. 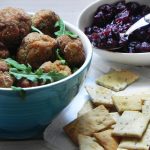