Sometimes referred to as a Spanish doughnut, Churros are a fried dough snack made of flour, water and salt. Enjoyed throughout Spain, they are normally sold by street vendors who fry them freshly on the street or by churrerías (specialised cafés). Fried in hot oil, they are crisp, fluffy and chewy all at once, with the best way to enjoy them definitely being to dunk them in some accompanying hot chocolate. Normally, served in a coffee cup, the hot chocolate is thick and dark, almost like a chocolate pudding. They are typically eaten as a breakfast or mid-morning snack but they are also often served for ‘merienda’, Spain’s afternoon tea. They are also popular as a hangover cure so it’s not uncommon for some churrerías to open as early as 6am on the weekends in order to service those people just on their way home after a night out. 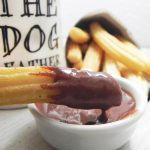 You might also want to try your churros sprinkled with some cinnamon sugar. Just mix 2 tbsp of sugar with 3/4 tsp of ground cinnamon.