Certainly not as well known as the classic Patatas Bravas, this hearty dish from the area of La Rioja, a small region in the north of Spain most famous for its high quality wines, is still very special. Indeed, celebrated chef Paul Bocuse, known as one of the godfathers of nouvelle cuisine, famously tried this stew in a well-known bodega in La Rioja and is said to have described it as ‘one of the greatest dishes created by man’ whilst stating that ‘it should represent Spain all over the world’. Traditionally a dish enjoy by workers who had spent their days toiling in the fields, whether collecting olives or harvesting the grapes, this classic dish is now enjoyed by many, for both its simplicity and its comforting ability to satisfy hunger whilst warming from the inside out. Packed with rich smoky flavours, at its most simple it is chunks of potatoes, onion, garlic, sliced chorizo and paprika. To fully enjoy this dish, be sure to have some bread at hand which you can use to soak up the leftovers. And of course the best partner for this dish is a good wine from the region, such as a crianza red which holds up against the smokiness of the pimentón. 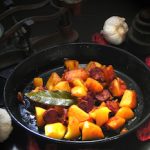