Stuffed aubergines or berenjenas rellenas are a very common Spanish dish. Enjoyed as a tapa or as a main course for a light meal, this is a recipe where you can get creative as the filling can really vary depending on what you have to hand at the time. Introduced to Spain and the Mediterranean by the Arabs in the early Middle Ages the Spanish enjoy aubergines in so many ways, whether roasted in a dish such as an escalivada made of strips of roasted aubergines, sweet peppers, onions and tomatoes, grilled served as a tapa or lightly battered and deep-fried, served with honey. 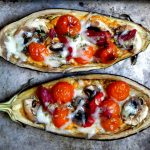