The origins of Tapas

No one knows for sure when the word tapas, meaning appetizer or snack, entered the Spanish vocabulary. There are just so many urban myths of how it came about that it is all but impossible to pinpoint the precise time of how or when it came into existence. But one thing is certain, the word tapas is derived from the Spanish verb tapar, to cover. Anyone who enjoys a glass of wine would testify to the fact that leaving a glass unattended means likely returning to find it full of fruit flies. Therefore it may be assumed that the most likely reason a customer was served a drink, together with a piece of bread and cheese or some ham, was to cover the wine thus depriving the fruit flies access to the drink, but with the added bonus of an accompanying snack! Other theories that have been proffered include a story surrounding Felipe III who passed a law insisting bartenders gave a snack with each drink they served. The hope was that this would help curb rowdy behaviour, as the food would soak up some of the alcohol. But this and other explanations don’t take into consideration the origin of tapas being derived from ‘tapar’, so at least in our mind don’t quite work as well.

Although tapas is the general name for a snack eaten with a drink throughout Spain, they are sometimes referred to in the north as pinxtos, which derives from the Spanish word pincho meaning thorn or spike. The reason they are referred to as pinxtos or pinchos is that traditionally most comprise of a small piece of bread together with a topping, for example grilled aubergine and goats cheese, and a large toothpick that is used to hold the toppings to the bread. Tapas on the other-hand will normally be served on a plate. However, this is only a general rule and certainly not set in stone as the two different versions often merge.

When and where to eat tapas?

Of course, tapas may be eaten at any time, but the general rule is that they are ultimately a street food culture, owing to the warm weather climate of Spain. Spanish like nothing more than having a drink, a bite to eat and catching up with friends. Hopping from one bar to the next for a drink and a tapa, and catching up on the local news is a very Spanish way of enjoyable social interaction. Many bars in Spain give free tapas with a drink, but bars in Granada in particular are famous for their generosity. Most towns and cities in Spain have some well known bars that are fundamentally set up as tapas bars, and these are well worth visiting in order to sample some sophisticated tapas. If your visiting a city and want to know the best places to go, then one idea is to join one of the many guided food tours that you find in the bigger cities. Companies like the Madrid Food Tour give their guests the opportunity to learn about real Spanish cuisine and access to a large variety of tastings and tapas, whilst providing insider information about what you should be eating, where, and why.

Tapas: A style of eating, not a way of cooking

Any food can be considered tapas. In fact the only definition that befits tapas is that it is small and served with a drink. On the one side, tapas could be nothing fancier than crusty bread and cheese or some jamón and tomato on a plate. On the other, it could be marinated anchovies with quail eggs, sautéed octopus or tortilla de patatas (Spanish omelette).

Most of the regions of Spain have speciality tapas owing to their particular climate, pasture, proximity to the sea and altitude. The Basque country for example, because of its connection to the Atlantic Ocean has some wonderful sea-based tapas (Roasted Piquillo Peppers stuffed with Garlic Prawns), known as pintxos in the Basque tongue. Trout from the Pyrenees are a firm favourite in Navarra, and it is no surprise that in Andalusia, with its huge crop of olive trees, olives are found abundantly in the form of tapas. Galicia, much like the Basque Country, leans heavily towards fish type tapas; whereas Granada, because of its long history of Moorish influence, has all sorts of kebabs (Spicy Lamb Pinchitos), cous cous and almond concoctions on offer – and remember they all come free with a drink in Granada! Some very familiar tapas that can be found throughout Spain would be: croquetas – it just wouldn’t be a Spanish bar if it didn’t serve croquetas. Also ensaladilla rusa (Spanish potato salad) is another staple in the majority of Spanish bars, consisting of tuna, boiled vegetables, mayonnaise and olives.

There are many bars in Spain that give free tapas when a drink is ordered and which will be brought to your table with your drink. But there is often a large selection on offer so sometimes it is worth waiting and choosing the tapa that looks the most appetizing. As well as the bars, there are also the specialist tapas bars or taperías and it is at these establishments where you are going to find the most variety and choice, depending on the town, city or region that you find yourself. One final tip – take your time. Tapas is after all a very social experience. So order a couple of tapas, enjoy and then decide what next takes your fancy.

So, is it Felipe III that we have to thank for the food phenomenon that is tapas? Or maybe it is down to the humble fruit fly? Who knows? But whoever or whatever started it, we certainly thank them for it. 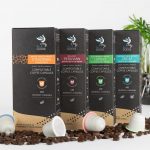 FREE Standard Shipping available on all purchases ~~ Blue Goose is NOW back in stock so she'll be flying fresh coffee to your door asap! Dismiss